Dalmatian National Parks by Boat and Bike 2 Sali to Trogir

Another lovely breakfast was followed by probably the hardest of the bike rides, along the length of Long Island (Dugi Otok).

It was all along a very quiet road with a few demanding climbs, unless one had an ebike, and some spectacular coastal views.

Getting ready to leave

L decided to stay with the ship for this one. There were some glorious views over the sea and the islands.

An early view back to Sali

There was a fish farm raising tuna, we were told. 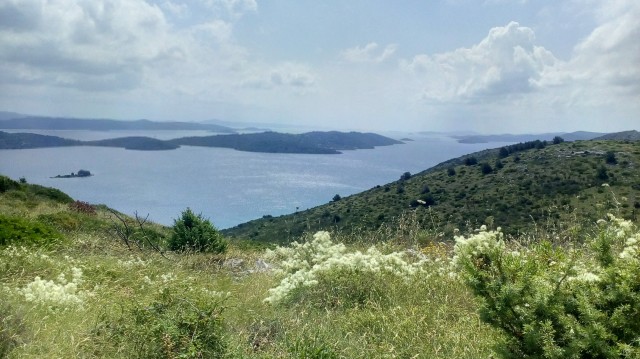 There was a strong wind that was not entirely in our favour and I had a gear malfunction and ended the ride on our guide’s bike. I arrived with the advance guard and we had a 15 minute wait for the ship to arrive at the ferry port of Brbinj, a pretty desolate place with an expanse of tarmac and a hut or two. 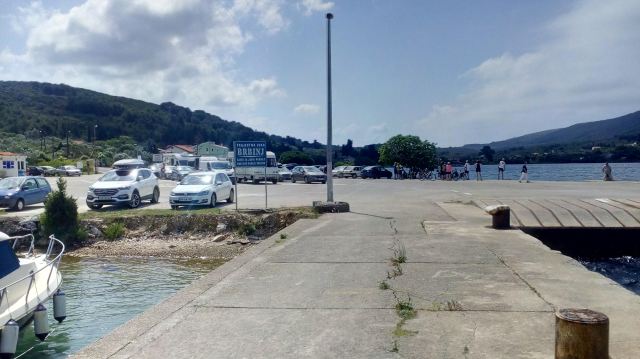 While we were there, the ferry boat arrived and we were amused to watch the anarchy of vehicles being loaded. There were a couple of people intermittently trying to direct traffic into lanes being totally ignored by drivers who just selected their own positions. We were due to travel on from Brbinj for a swim elsewhere but the strong wind lead to a change of plan and we swam from the ship at Brbinj instead.
There was a fabulous spread for the buffet lunch. 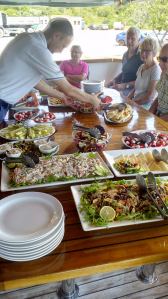 During lunch we cruised to Zadar. Soon after we berthed, we were given an interesting guided tour of the historic old city

and then left to our own devices for the evening. We took a small meal in a pleasant garden near the centre of the old town, then caught the sunset and the curious light show and sea organ, and returned to the ship in the dusk as a thunderstorm broke further inland.

Next day there was a short cruise to the island of Ugljan, just across from Zadar, where we docked at a small town called Preko 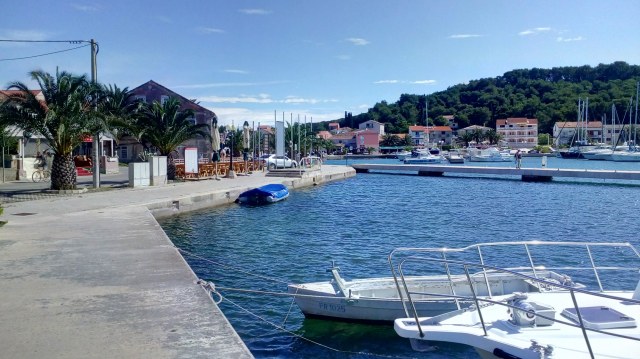 and the bikes were unloaded

for our ride across two islands to Tkon. This was quite a long ride but mostly flat and easy going. 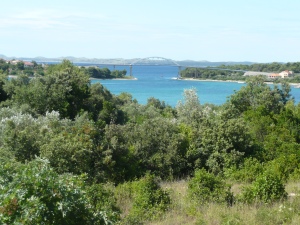 The bridge joining Ugljan and Pasman

After crossing the bridge and joining the island of Pasman,

View from the Zdrelac Bridge of a boat that managed to get under it. Here is a link to one that did not https://www.youtube.com/watch?v=o695S2-VzS0

the group stopped for a break in the village of Zdrelac. L and I had consistently been back-markers so we asked to proceed on our own. We checked this out with our guides and set off on a quiet track alongside a more major but still pretty quiet main road. We passed a curious terrace of stone-built houses with domed basements that we thought could have been fishermen’s cottages. Eventually, the tarmac track became a stony path and we walked our bikes uphill about 15 metres to join the road. Arriving in Tkon we could see Romantica but it took us a while to find a way to get there.

When everyone arrived, bikes were rapidly loaded and we sailed off for Zlarin, an island and small village with a winter population of less than 300. It is in the province of Sibenik. There were strong winds on the way there and we were warned to take great care when moving about. Conditions for docking at Zlarin appeared challenging

but the captain coped with aplomb, although he was shouted at by the harbour master with an electric scooter because a ferry was due and our ship was in its way. We rapidly disembarked for a walk around the small town while the captain sorted out the ship. There was a chance to swim from the beach but I declined on this occasion. The town was pretty but unexceptional, I thought.
After we had all returned to the ship we were off back to Rognizca, where there was good shelter from the wind. Another lovely dinner was served, followed by a stroll among the many holidaymakers busy buying things from the many stalls, and having pictures taken with among other things a group of colourful parrots. Over supper we were warned about an early start for the ship next morning, and we were off about 6.30 for the island of Solta, the closest island to Split.
We arrived at the pretty harbour of Mesalinic on Solta just after we had finished breakfast. 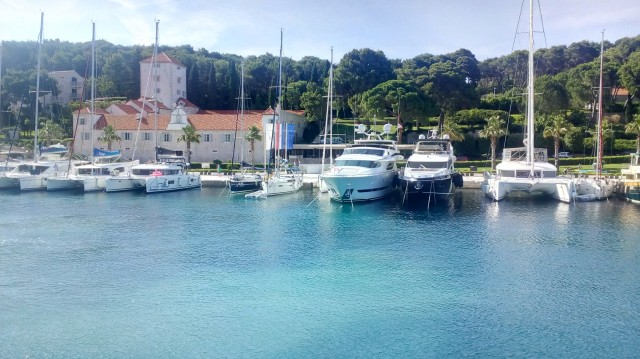 Our bikes were unloaded and we started our round trip of about 15km to Grohote. We had a short time at a small, daily local market in the village. The vegetable stall was a picture and L quizzed the woman about her large melons.

The melons in question!

We then visited a bee expert at his “bee farm”. There we had an impassioned presentation on bees and beekeeping, tasted some bee products and visited a beehive and shop.

On the return bike ride I was disappointed to see so much roadside litter but to counter that we also passed lots of olive trees and rosemary bushes, and the view on our descent to the harbour was exceptional. Our ship took us a short way to a sheltered spot for a swim from the stern deck; peaceful and crystalline blue sea,

excellent and memorable. Then we left to return to Trogir, our starting point. Shortly after arrival we had a guided tour of the old town before our final dinner.
This was a very memorable trip with stunning scenery, excellent company and smooth organisation. But there were also many more mundane issues that stick in the mind like how to dry swimming gear and smalls outside our cabin doors and remembering to retrieve them during high winds. And the amusing antics of Zlatko, our waiter, and the line-fishing from the platform on the stern – all fish eaten for dinner later. And the food.

This entry was posted in Overseas walking and tours. Bookmark the permalink.