The path from Moelfre goes past the lifeboat station and a large sculpture of Dic Evans, a renowned local lifeboatman; he earned two RNLI gold medals for bravery, which is exceptionally rare.

Dic Evans statue and the lifeboat station at Moelfre

The path soon passes a monument to a tragic wreck of 1859 when the Royal Charter sunk and about 450 people lost their lives. 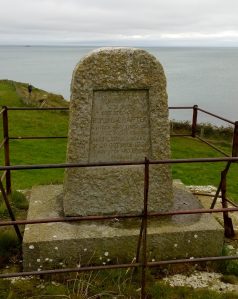 This happened during a very severe storm that caused about 200 ship wrecks. The Royal Charter was returning from Australia with a large quantity of gold, some of which was washed up on the shore and reputedly made many local people very wealthy. Gold was still being found in the sea nearby as recently as 2012.

This is one of the least developed parts of the Coast Path but not without interest and beauty.

The path follows a longish deviation inland to go round the large inlet of Dulas Bay. 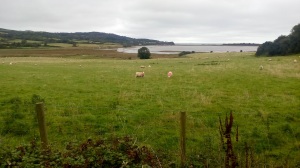 Looking towards the sea from near the Pilot Boat Inn, our coffee stop of the day

From the road by the Inn we took the path over some marshy land, crossed over a small river and walked alongside the marsh on the far side of the bay before we climbed away from the water.  We stopped at Dulas Church and had our lunch while sheltering from the rain in the porch. Continuing on, we reached the coast again just opposite Dulas Island with its lighthouse-like rescue tower built in 1821, provisioned in times gone by as an emergency shelter for shipwrecked individuals. 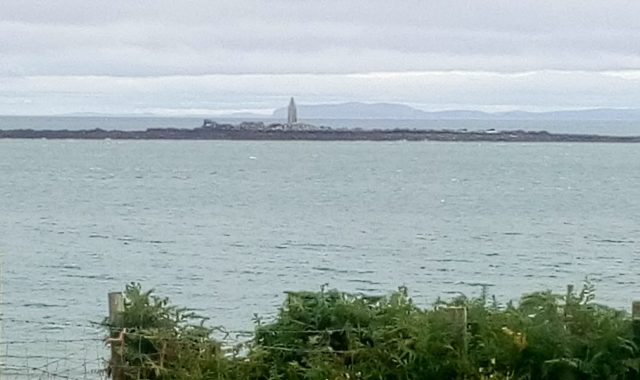 You can tell from the pictures that this was a rather gloomy day though the wildlife was quite special. We saw porpoises and peregrines as well as the usual suspect sea birds like turnstones and oystercatchers. However, during the afternoon the weather steadily worsened; so steadily that we did not put on all our waterproofs and by the end of the day we were very, very wet through, to underwear! The countryside was very attractive and this is a typical view showing our approach to Point Lynas lighthouse.

for the night and more than grateful for the extra towels they provided. That evening we ate in the bar. It was local Bingo night and we were ushered out of the Bingo room.

It rained heavily in the night and was still at it next morning. So much so that we dawdled around in the hotel waiting for it to ease off. The hotel staff were very understanding and even gave us a free coffee while we waited. We finally left around 11 am. This was one of the shortest days, about 12 km, so the late start was not a problem. There was a short walk along a road before we rejoined the Coast Path and walked down to the cliffs and on to Bull Bay where we saw a kayaking group from Plas y Brenin setting out on a coastal row.

From this point we stayed on the cliffs looking down on some dramatic rock clefts, some of which the kayakers entered into and exchanged banter with us as we passed by. As we reached the point where we could clearly see the Porth Wen brickworks, the kayakers were paddling across towards it, possibly just visible in the picture. 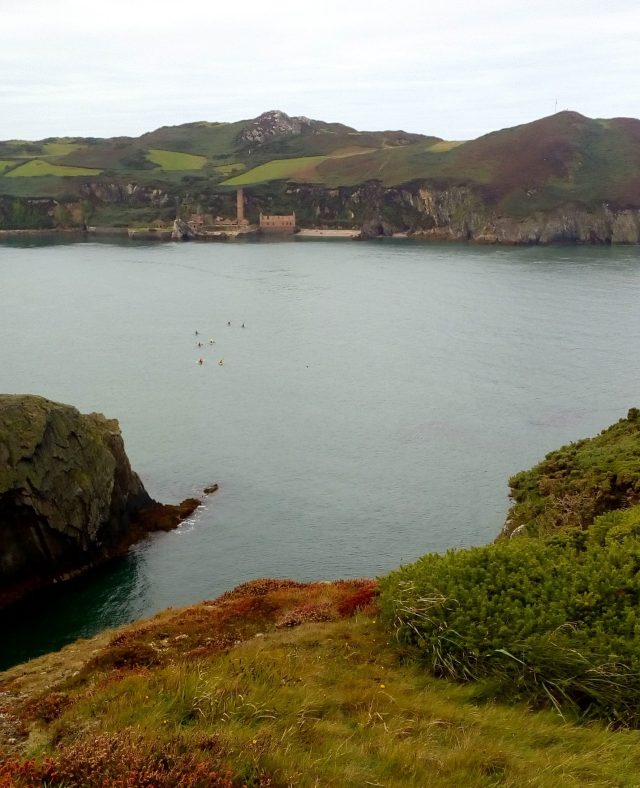 Brickworks used to make bricks and floor tiles using quartzite from nearby quarries. It was closed after WW2 because access by sea was judged too dangerous.

Climbing away from Porth Wen we noticed the remains of a winding house associated with a tramroad used to deliver material to the works.

There is a lot of industrial archeological interest on this stretch of coast. Amlwch was a centre of copper smelting, the copper being mined in the nearby Parys Mountain. There was a disused factory that extracted bromine from sea water close to the Coastal Path. The Porth Wen brickworks specialised in firebricks used in steel-making furnaces and a way further on from these works we found another factory; a china clay works, the Llanlleiana Ruins.

Before we reached that there was a dramatic stretch of coastline culminating in the view from  Llanlleiana Head, where an excited group were watching dolphins and gannets from an old lookout building that apparently boasted an underground wine cellar.

From this point the view towards Cemaes, our destination for the day, was equally dramatic. 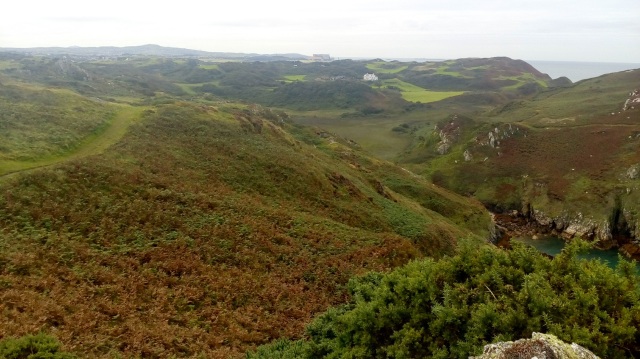 This was truly a beautiful piece of coastline. Here’s the view back towards Llanlleiana Head as we approached Llanbadrig Church

Llanbadrig Church is one of the oldest Christian sites in the UK; it was founded by St Patrick (Padrig) after he was shipwrecked nearby

The beach at Cemaes has an interesting and novel wave-activated bell.

That night we ate at The Stag, the northenmost pub in Wales.

This entry was posted in Walking in Britain. Bookmark the permalink.