Refuge La Madone was very full that Friday night and there was a great deal of pressure on showers and toilet facilities. We were fortunate that our dortoir, with just 4 beds in line on a raised platform, was just opposite the shower/toilet; the only facility on that floor with at least three other dortoirs sharing. Neither the door on our dortoir nor the washroom would either shut or lock, but frankly this was a luxury that did not trouble us overly, the only exception being while I was showering and the door blew open. This was followed by several moments of confused, panicky activity. We arrived about 4.30 so after showering etc there was not much time before dinner. Dinner was another excellent meal which we took with a Parisian. His name was Aimen and he spoke faultless English.

Breakfast was the usual Refuge fare and very welcome. We ate around 7 and were on our way around 8am, having successfully found vacant toilets and wash basins. The weather was fine but the sun had not yet reached into the valley where we were walking. The refuge stood at the end of a road amongst a cluster of other buildings including a church, which I snatched a quick look around when I arrived.

Our destination for the day was St Grat, a hamlet of the Belvedere commune, following a recognised deviation from the GR 52 that avoids a high col. We also took it to avoid arriving at Refuge Nice on a Saturday, which I guessed would be very crowded.

The walk was a big climb to start with leading up to a very attractive high valley Vallon de Ponset.

Climb up from La Madone 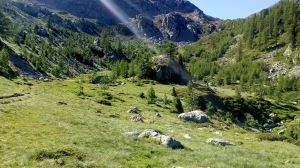 After a further climb we arrived at Baisse des Cinq Lacs and had a great view down to the lakes and across an expanse to the climb we were going to have to make to the Baisse de Prals. 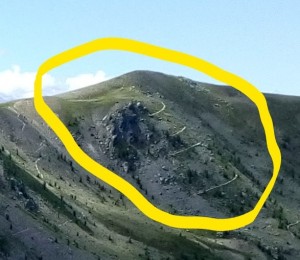 The lakes were very attractive and we decided a good place to take an early-ish lunch. Curiously, we found a small pile of dragon fly wings on a rock as we were seeking a picnic place. Finding our way across to the climb we needed to make was a little tricky. We could see a high level belvedere track but our map and the track markers indicated we had to go down first. Reluctantly, we took the lower track which took us down and across quite a long way 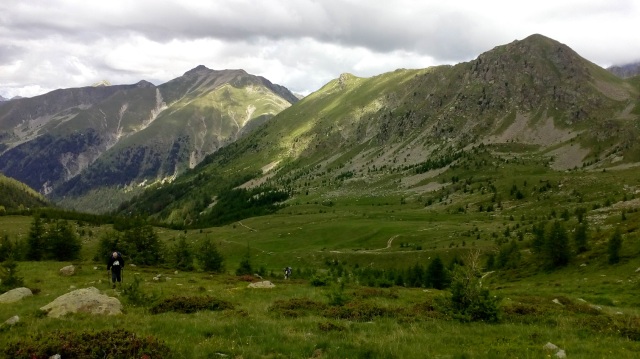 The start of the climb

and eventually joined a path that is a listed GR 52 variant that climbs up to Baisse de Prals. It was a long climb made more demanding by high temperatures and growing humidity. The climb finished with sets of zig-zags. At the top there were great views back to where we had come from 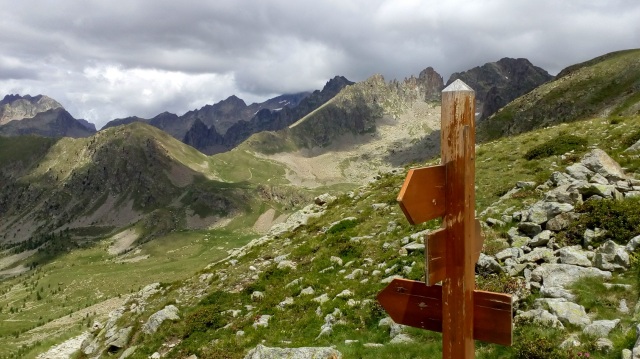 Where we had come from in the direction of cinq lacs

Back down the hillside to where the paths joined

We then started a long descent of about 700m or more into the Vallon de la Gordolasque and the village of St Grat. There were lots of flowers on the way down but it was an unremitting descent and we were pleased to get to the road at the bottom and have a few hundred metres of road walking to stretch our legs a bit. However, by this time it had started to drizzle and we had donned waterproofs before we reached the Relais des Merveilles; a very welcome site. We arrived about 4.30. 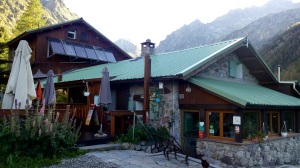 The accommodation was excellent, highly recommended. We had a dortoir with 6 bunk beds for the 4 of us and while we were told others might join us, nobody else arrived. The Relais was a hotel as well and the food was excellent. Dinner was melon with Parma ham and salad, blanquette de veau, cheese and isle flottante. The accommodation was very clean and just outside our dortoir was a large lounge with a woodburning stove and large screen TV. The stove was very welcome because it rained heavily in the evening and temperatures plunged. Breakfast was also of a much higher standard than we expected and the whole demi-pension was a bargain at 51 Euros per person.

As usual we had breakfast at 7 and were off around 8. It was not going to be a long day and we set off leisurely up the road to where it ended at a large car park/camp site which was already very busy and bursting its capacity. Cars were arriving and retracing their path to park by the side of the road. 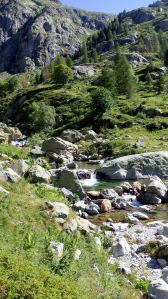 Stream with many rock pools

and later a magnificent waterfall. We carried on climbing beyond the waterfall and had a rather glorious view back down the valley.

Eventually, just before we reached a hanging valley, we walked through the Mur Des Italiens (Italian Wall), the remnants of an old border post between France and Italy. The border was moved at the end of WWII. This is what we were told by another walker but I have read on the Web that “According to oral tradition, this chicane was built of dry stones to protect the county of Nice from the Austrians.” Whatever, it came as a rather startling sight in an otherwise desolate landscape. 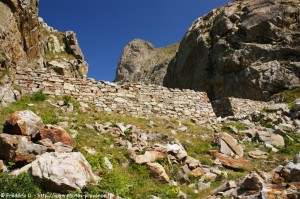 After entering the valley we crossed the stream we had followed all morning on a sturdy wooden bridge and started climbing again until we reached the barrage wall of Lac de la Fous.

As we get closer I was astonished to see a group of three chamois walking on the almost vertical smooth concrete barrage wall, apparently licking the salts from the surface.

Passing the barrage wall there was a great view across the lake to Refuge Nice, our destination for that night. 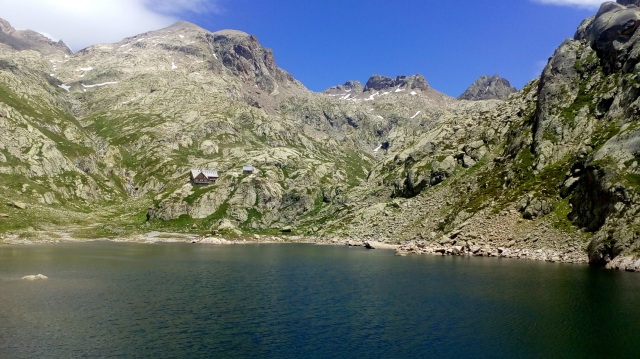 We still had a walk around the lake, a tricky stream crossing beneath a magnificent waterfall, and then a short climb to the refuge but there was a coffee waiting for us and a chance to sit down and really take in the local views.