South Downs Way (SDW) Pyecombe to Eastbourne, the end of the Way

Wednesday 15th was cloudy and windy again and we had some showers, heavy at times. We left around 9 after a good breakfast with an impressive array of fresh fruit. It was a shortish day of about 17km which gave us plenty of time to look around Lewes. Leaving Pyecombe we walked through a golf course and uphill to pass close to two windmills, called Jack and Jill. 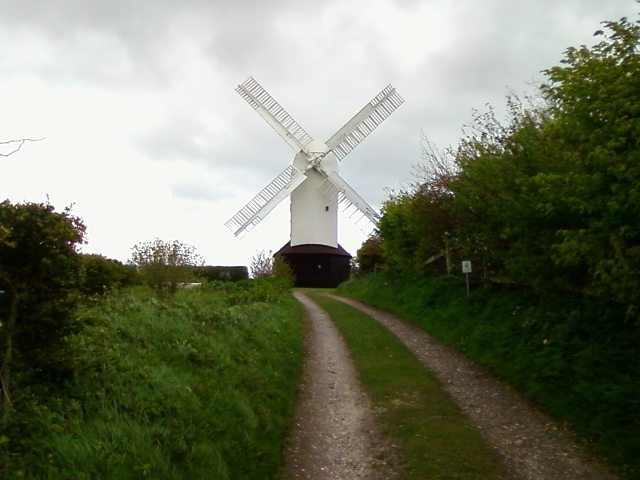 This is Jill of “Jack and Jill” Jack was in a state of decapitation at the time!

There was a particularly heavy shower on our arrival in Lewes and we were pleased to pop into a Polish coffee shop and shelter, and drip. We took a look at the Castle and wandered down the High Street which, unusually, had a wide range of small local shops; very few national chain stores. We then visited the Brewery (Harveys) pub and were able to have a taster of each of their brews before plumping for a pint of the chosen one. We arrived at our B&B around 4.30. The landlady appeared a little phased by our arrival, but it seemed this was her default state. The accommodation was comfortable enough but a little haphazard. Dinner was at the nearby Snowdrop Inn, a delightful, quite traditional pub with an unconventional and broad menu selection. I had lamb medallions with black pudding.

Thursday was probably the best weather of the trip and we had a decent walk of about 24km before us. Lewes is not on the SDW and we had to take quite a deviation to get there. Not being walking purists we decided not to re-trace our steps to the SDW but, instead, to follow the river and rejoin SDW at Southease. I think this was the best part of the trip for wildlife, lots of different birds seen along this rural stretch of tidal riverbank. In the sunshine, this was a glorious section of the walk. We found a pub in Rodwell for coffee, The Abergavenny Arms, then joined the SDW again just before the very picturesque church at Southease. 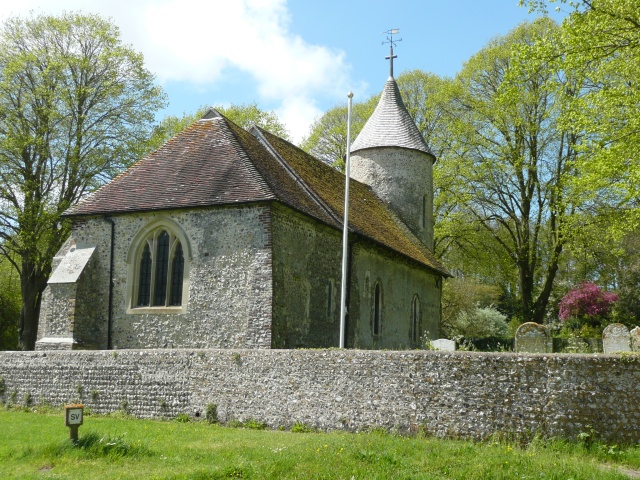 After crossing the River Ouse, the railway and the A26, a level crossing and two bridges respectively, we climbed Firle Beacon and stopped near the top for lunch in a spot that was as out of the wind as possible; it was a sunny day but the strong, cold wind was still ever-present. This was a day with wonderful views inland and out to sea across Newhaven. We arrived at Alfriston just in time for a hot drink and some cake, the shop was on the point of shutting and we had to sneak out of the rear garden when finished. The upside of the rear departure was that it took us right past another very pretty church. 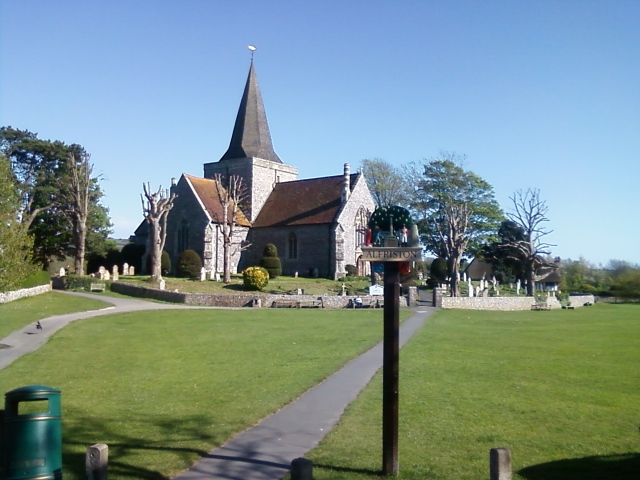 We then just had about  1km to go to get to our “Country house” B&B, certainly the grandest of the trip, and the most expensive though not by much. That evening we walked another km or so to the Plough and Harrow for dinner, a very nice traditional pub with good food and a charming atmosphere. This was M’s last day. She finally gave in to her cold and was picked up the following day to go home. Such a shame because in many ways the last day was the best.

Friday 17th May, our last day of walking SDW. We were sent off with an excellent cooked breakfast. The day was cloudy and decidedly cool, if not cold, due to the wind. But it was dry all day and visibility was good. Cuckmere Haven was the first strikingly attractive feature 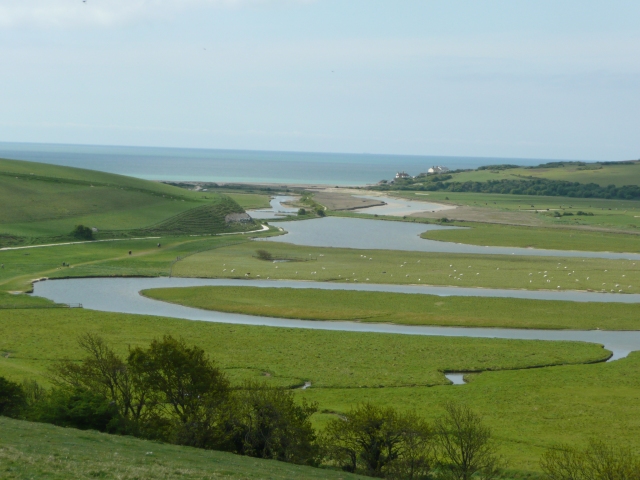 where the SDW enters the Seven Sisters Country Park at Exceat. We took a look around the visitor centre and had a coffee. Then off over the various “sisters” (hills). The scenery is completely different from the rest of the SDW with white cliffs dominating the views. 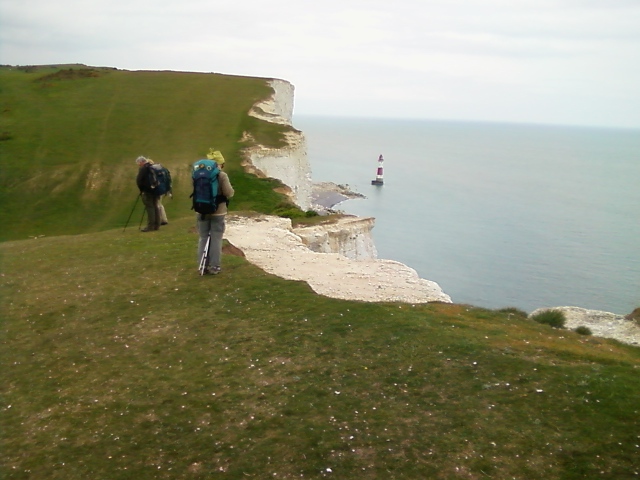 We arrived at Birling Gap for lunch and marvelled at the rapid coastal erosion there. The next target was Beachy Head after passing Belle Tout, an old lighthouse that was physically lifted, all 850 tonnes of it, and moved 17m away from the eroding cliff face. Belle Tout is currently a private house offering B&B. On Beachy Head we were approached by the Beachy Head Chaplain whose main task, along with volunteers, is to talk people out of suicide attempts. After a few introductory exchanges he started telling us about the aggressive nature of the chalky footpaths for leather boots and therefore that his walking boots wear out very quickly. It was all a little strange!

The final stretch of the SDW seemed to lose all signage, although we, anyway, had decided to take a lower path into Eastbourne. We ended up at the official end/start of SDW path and then descended to the promenade for a seemingly endless walk to our B&B, which turned out to be on Marine Road not Marine Parade as we expected. This B&B was on a par with the pub we stayed in at Buriton, adequate but far from commodious. After our 24km or so walk we were very pleased to find an excellent pub just over the road. The beer was good with a pleasing variety and food portions were generous – the prawn cocktail starter selected by E was almost scary in its size. I had cod mornay.

Next day, Saturday, we walked to the station and returned home.