About 30 years ago I used to visit second hand bookshops quite regularly and bought old books based mainly on age and appearance. Mostly these books have been moved with us from house to house only taken out of bookshelves when needing dusting or boxing up for a move. Recently, with the aim of downsizing I have been looking at them in more detail and after some research found some interesting and emotional links. This blog concerns two such books both owned at sometime in the past by Cameron Macmillan. 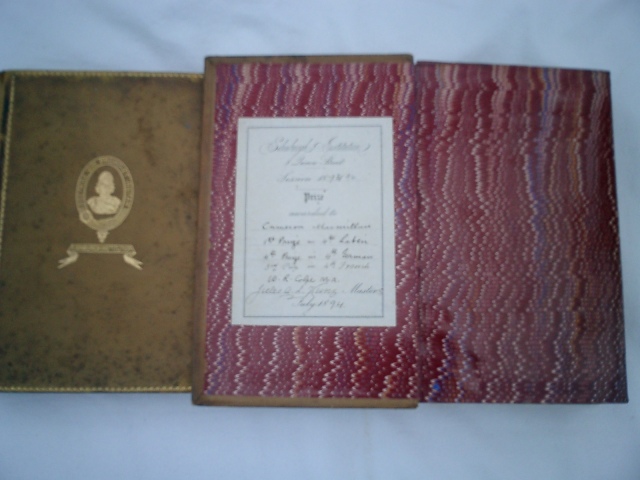 The books are leather bound editions with the Edinburgh Institution crest embossed on the front cover. One is “Journal of Sir Walter Scott” published in Edinburgh by David Douglas in 1891. This was presented to Cameron in July 1894 for 1st Prize in Latin, 4th in German and 3rd in French. He was in the 4th form. The other is “Cicero and his friends” by Gaston Boissier published in 1897 by AD Innes & Co London and presented to Cameron in July 1897 for 5th prize in Lectures on Physics and Chemistry.

Cameron, I have discovered, from Census and other records available online, was born in 1880 in Edinburgh while his parents were living at 2 Belford Park. His father John, born 1844, was a wholesale tea dealer and his mother Jessie seemed to be fully occupied producing children. In 1871 while living at 41 Heriot Row they just had one son George. In 1881 they had 6 children: George, Jessie C (Chrystal), Thomas, John, William and young Cameron 7 months old. Ten years later in 1891 it seems Jessie is not at home, probably at college, but Norman, Colin and Robert had arrived. Rather intriguingly in the 1901 census the offspring were living together at Corstophine Hill House George (30), Jessie (28) William (22) Norman (18), Robert (17) and Colin (4). Cameron now 20 and with his prize books no doubt was occupied as a “Stock Brothers Apprentice”. I am not sure what this means but perhaps George has taken over the tea business of his father and Cameron is now an apprentice working for him.

In 1915 on 2nd October Cameron signed up and joined the Seaforth Highlanders. He was killed in action on 22nd August in Belgium while acting Captain.

Jessie Chrystal Macmillan, Cameron’s sister, died on 21st September 1937 at 8 Chambers Crescent, Edinburgh. Her beneficiaries were her sons William, tea merchant, Colin, engineer and John, another tea merchant. Jessie was a famous figure in the womens rights movement and was an internationally recognised peace campaigner. She merits a considerable article in Wikipedia http://en.wikipedia.org/wiki/Chrystal_Macmillan which bears reading. One wonders what her brother Cameron might have achieved had he survived.